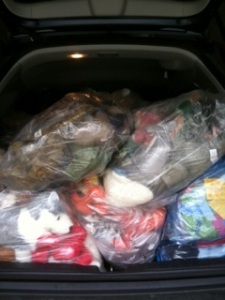 A funny thing happened. Janice from the Fairless Hills area has been collecting stuffed animals from her co-workers for a few months. They were in her car, her living room, on her bureaus and all over the house. As each friend brought them into work, everyone admired how cute they were and everyone had a story about where it came from.

Her husband was wondering when she was going to move all of the furry critters out of their house and on to their new owners. She had lots of bags,  all double- bagged,  and secured tightly at the top, ready to bring to Chalfont.

Then, one of her co-workers who has an 8 year-old daughter called and said,” We are missing a part of my daughter’s basketball uniform. The last time we saw it was the night we were getting the stuffed animals ready to take to you. Can you check in the bags and see if you can find it?”

So Sue painstakingly unpacked all of the 455 stuffed animals, and while she admired each one, she  concluded that the missing gym outfit was not mixed in with the donated furry critters.  She then had to repack everything.

The Dad told her the next day at work, that  his  little girl found the missing outfit in her school locker.