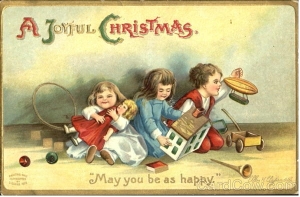 When my third grade daughter was about to stop believing in Santa, we thought of a way to give her hope for another year. What did I do to prove Santa was real? What’s a mom to do?

I drew a colorful map of the North Pole and then wrote directions from Santa to his reindeers indicating how to get to the Kristen’s house on Christmas Eve. I placed the map on the rug next to her bed so that when she woke up in the morning, it was the first thing she saw.

Directions for Reindeer to Get to Kristen’s House in Bucks County, PA

What else did I do?

I sprinkled white baking flour on the kitchen floor and imprinted the shape of reindeer paws, a sure sign they had been there.

I bought an old fur coat at the thrift shop and cut it into patches of fur and left pieces on the step, left-behind reindeer fur, no doubt.

I bought “white beard” material at Joann Fabrics and left a handful of Santa’s beard on the chair. I even left a photo of Santa feeding his reindeer. (That was actually me in a Santa suit borrowed from my Uncle Ed. I had my father go to a petting zoo with me where there were huge reindeer with antlers in cages. He snapped some photos and it fooled everybody. Nobody knew it was really mom!)

In total, I had 6 “Santa Clues” that proved Santa was there. The tradition went on for years, with other moms requesting our Santa Clues kits for their family tradition.

In 2011, I decided to make an audio CD of the story Christmas on Lindbergh Mountain- The Untold Story of Santa’s Magic on Christmas Eve. In 1996,  I wrote the story for my children and told it to them over the years at holiday time.

On our site, there are a hundred things to do with the kids to make Christmas even more magical…….and the ideas do not even cost a dime!

You can download the story on ITunes for $1.99. Then do the fun ideas that accompany the story.
https://itunes.apple.com/us/album/christmas-on-lindbergh-mountain/id504942223

Or you can purchase the actual CD of Christmas on Lindbergh Mountain on our website.  www.lindberghmountain.com